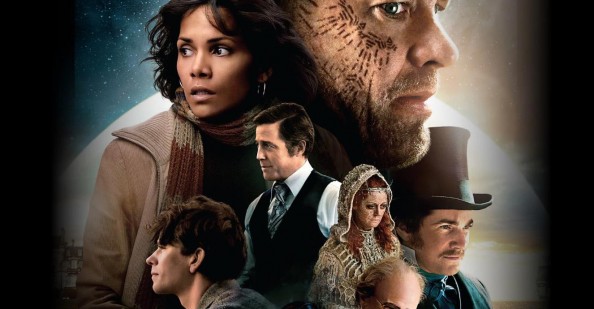 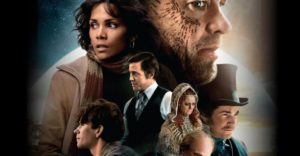 Residual Afflictions give rise to root actions experienced as the self in present or future births. – Yoga Sutra 2.12

I thought for sure Tom Hanks was going to ruin this movie. Though he did wonderfully in Saving Private Ryan, Hanks’ “Gump-ishness” seemed too light a feather to be set in the wings of such an epic yarn.  Luckily he and all the other actors are perfectly placed in a film emphasizing multiple-life-paths over individual personalities as character arcs.

The Wachowski’s, creators of the Matrix trilogy, have been known to tackle some enormous thematic topics in their visually stunning and highly kinetic films. The scope of Cloud Atlas, their most recent film released October 26th, 2012, is one of the more ambitious in a long time for any movie… Spanning genders, generations and leaping through time and space on a terrestrial and other-worldly level, Cloud Atlas follows the life-threads of several characters that have gathered into a major grouping or clan (think: all on the same cosmic bus) through past associations and “karmic” interactions.  What is binding action?  How do we free ourselves of past actions?  What defines a soul or person?  How does a person really change and at what level does this change take place? These are just some of the questions explored through the actions of common and yet individual lives.

Though this movie noodles through these questions from a multi-narrative perspective framed by storytelling both written and verbal, the answers discovered are as nuanced and as ambiguous as the path of the clouds across the sky.  Despite this almost fuzzy meandering through a present defined by past actions, it is the characters surviving in what seem to be the most powerless lives that have the greatest opportunity to rise into a deeper purpose.  Exploring the clearest, most enduring traces of who they really are, these former victims take full advantage of defining their own potential using their current situation as a launching point to fuller consciousness. Somni 451, for example, is a slave of the future, genetically engineered to serve the “almighty consumer” in a life deemed as valueless as it is brief. And yet as a replicant “bred” for such a purpose and living in an environment reinforcing this world-view upon pain of death, she is unaware of her own plight until a series of events illustrates her own humanity to herself.  Mirroring another thread of outright slavery from the 1800s and more subtle subtexts of imprisonment and loss of freedom in other lives, Somni 451’s realization of her own plight and the dawning of comapassion for herself and others in her situation provides the spine of the movie’s greatest awakening to how we may use our circumstances to go beyond them.

“We are only what we know, and I wished to be so much more than I was, sorely.” – David Mitchell

Many characters seem to be a bit uni-dimensionally portrayed without the complexities of positive subtext or at lest a clear motivation. Even Smith in the matrix, a much spiritually deeper yarn, had his desire to be free.  A few characters in Cloud Atlas, Tom Hanks’ portrayals included, have more nuanced life-threads that begin to touch on the complexity that makes human action liberating or binding. Slavery, greed and cruelty are balanced by the sheer depth of Love, and though such a love may not be fully realized on the screen what the movie lacks in complexity within a single character it more than makes up for in its scope and ambition. Remembering the character’s names and specific actions can be a bit difficult in such a sweeping epic, but that may be part of the point: individual lives matter only as much as they alter a person’s destiny and the direction of their karmic evolution. To glorify one life, condemn another or model a third would halt the wheel of karma and thereby hinder the turning of evolutionary action.

Like many of its seven main character life-threads, Cloud Atlas seems to reach a bit too far without fully grasping the true depths of what is sought.  And yet, how else does one at first comprehend the incomprehensible but by reaching? Like the movie these characters seem to stumble upon opportunities to choose a different course of action. These forks in the karmic road – the killing of an enemy here, the claiming credit for someone else’s work there – leave further impressions defining life-streams leading eventually, one might assume, into the final realization of oneness. Until then, like a lifetime or three, this film is to be experienced and will leave you with a ringing awareness that there are timelessly layered depths here within yourself that have just begun to stir.