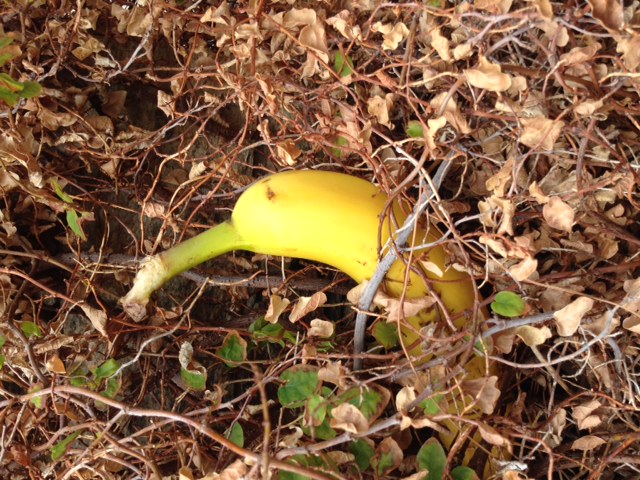 The Safety of the Familiar

Many animals, especially cats it seems, can treat benign objects as if they were dangerous threats.  Even an unfamiliar banana can become a ferocious adversary when seen through an animal’s eyes.  The animal part of the human brain can also look at the world through this same filter of survival.  When left to it’s habits and without a conscious focus, the Animal Brain defaults toward threat detection and threat prevention in order to stay alive.

In the survival game, familiarity equals safety. The logic of a fear-based psychology and physiology goes something like this: If I am still here, whatever survival strategy I did in the past must be successful at keeping me here.  If I am perpetually preparing for threat and still alive, then I must repeat this.  But what if the fear that results from this preparation becomes all too predictable?  The feeling of threat can become so familiar that it actually might feel “safe” to the body’s trillions of cells.

The human body does not function optimally in a constant state of fear. As a survival mechanism for self-preservation, fear is supposed to be very transient and infrequent. If fear becomes the new familiar norm, cells can become addicted to the strong emotional and biological reactions triggered by fear.  Fear can then become like a drug of choice.  Once addicted, the brain and body do not need a valid threat to feel a familiar threat. The ego or false-self will manufacture one in order to keep the “safe” and familiar feeling of fear alive.

To satisfy a fear habit, the ego hijacks the evolutionarily honed survival state of fear that has kept human beings going as a species for millions of years and turns it into F.E.A.R. – False Evidence Appearing Real.  The only problem is this F.E.A.R. is not real.  Running from or attacking something in the mind that is not in the present moment creates an antagonistic threat-based relationship filled with aversion that feeds the ego’s suffering.  This only serves to make the feeling of threat feel stronger, leading to defensive or aggressive reactions that only make F.E.A.R. feel more real. 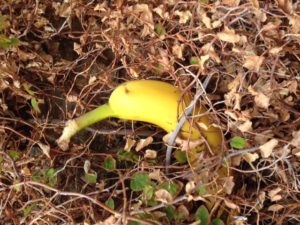 Rare Photo of a ferocious banana in the wild

To fully assess risk in the world, the human brain and body are made to “take on” the qualities and characteristics of the surrounding environment so that we can learn about survival without actually dying.  Fear creates an intense unconscious focus to imprint survival skills into long-term cellular memory.  If Neanderthal Uncle Harry went to the watering hole recklessly and got grabbed by a voracious crocodile, the observer gets a cellular vicarious experience of trauma to imprint that this is not good survival behavior.  The neuropeptide chains associated with fear are so strong, however, that like any drug they can become addictive. As Patanjali noted 2500 years ago, when focus is determined by unconscious reaction it creates a binding or “samyoga” that entangles the observer with what they fear the most, making what is not wanted THE object of intense attention.

The binding of the seer with what is seen causes preventable suffering.    – Yoga Sutra 2.17

Fortunately evolution gave human beings a New Brain on top of the existing Animal Brain two million years ago.  Human beings are born with the ability to focus attention intentionally beyond animal instincts.  Consciously placing attention on an observed object for more than a few moments moves the mind closer to a state of meditation.  Meditation is simply extended, intentional focus. This more conscious union with the object of attention means that the observer is choosing to focus on something that is neutral or uplifting.  Not only does meditation use the higher brain to join the observer with what is being observed, it also begins to exclude everything else.  Because F.E.A.R. is false evidence that only appears real, it is ultimately a fabrication.  Meditation helps this fact of F.E.A.R.’s unreality to be recognized.

Attention is the lifeblood of perception. Whatever is worshipped with attention becomes real to the brain and body.  When F.E.A.R. is not sustained by a constant dedicated focus, it begins to crumble and fade away.  The resulting disentanglement from the object of F.E.A.R. allows a fundamental shift when it comes to viewing the world.  The frontal lobe and neocortex of the higher brain can then provide the opportunity to focus on what is wanted, not on what the addicted animal instincts require.  People experiencing PTSD or post traumatic stress disorder for example, may find themselves caught up in a loop of intensifying  fear.  If the object feared is no longer happening it is not in the present moment even though every cell in the brain and body may protest that this is so.  The lesser-known condition of post-traumatic growth however, takes that same recurring perception of a traumatic event and turns it upside down.  The object of F.E.A.R. is seen as an opportunity beyond its debilitating reaction, something that elevates the observer beyond the simple will to survive.

Whether that initial F.E.A.R.-based object is a despised boss, feared illness, dreaded bank account or painful memory, changing the relationship to that object of focus changes perception and experience.  If the object of F.E.A.R. is allowed to become a teacher, an ally or a messenger, then the higher brain can turn that F.E.A.R. into something beneficial or at least neutral.  In this new state of consciously directed attention, the conflict of fight or flight is no longer valid or necessary.

When Life Gives You a Banana

In applied Yoga philosophy, the resistance or reaction to the world that comes with F.E.A.R. creates something called vitarka or contrary thought and action that results in endless suffering.  Animals are programmed to err on the side of caution.  Human beings are also animals. In order to survive, an animal caught up in the loop of false perception may end up treating benign objects as a real threat.  The cat needs the banana to play its “evil” role so the cat can play its role – of victim, attacker, hunter or hunted.  Like cats mistaking bananas as deadly enemies, we too may find ourselves facing life’s bananas.  And the human brain offers more options than these ancient roles defined by threat and survival.  Once a banana is allowed to just be a banana, the biological imperative to fight or run can dissolve along with the conflict.  Then that person, situation or object can be reappraised in a different, more helpful way and that once terrifying banana of F.E.A.R. can become the key ingredient of a yummy banana split! 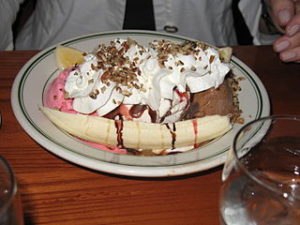